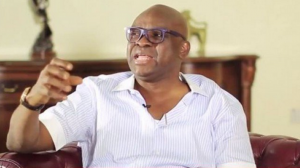 Following the brutalisation and detention of three people, including a nursing mother and her baby, by policemen in Ado Ekiti, Governor Ayodele Fayose of Ekiti has vowed that manhandling of women in any guise will not be tolerated in the state.

The governor said no responsible man would beat a woman, manhandle or brutalise her for whatever reason. He added that it was unlawful for a policeman to raise his hand against a woman.

Policemen in Ado Ekiti had on Friday brutalised and detained a woman, Mrs Toyin Adeyeye, her two-month-old baby, Heritage, and her younger brother, Adeniyi Dada, for allegedly refusing to give bribe at a police checkpoint.

It was learnt that about five policemen descended on them and beat them mercilessly before taking them to New Iyin Police Station where the beating continued.

Fayose, in a statement on Monday by his Chief Press Secretary, Mr Idowu Adelusi, said he had met with the state commissioner of police over the matter.

He said, “It is highly irresponsible for any man to brutalise a woman for any reason. The law that forbids violence against women is still operative in this state. And I can never allow any form of brutality of women under my watch as governor in Ekiti State. Women are even described as the weaker vessel. As such even if you marry her, does that deny her of her rights?

“It is particularly sad that such a report was coming barely a week after we celebrated International Women’s Day in an unprecedented style in this state. I have already ordered an investigation into the matter. Anybody found culpable in the case will face the court of law.

“I am also using this opportunity to sound a note of warning to policemen who take people’s vehicle particulars, put them under their armpits and demand for bribe. Such cannot be allowed any longer in Ekiti State.

“We will get to the root of the matter and make justice to prevail.”

IsimbidoTv Will Be Launched Officially Today

No Result
View All Result